Steep mountain sides surround us, like wise trolls from a distant timeline, weathered and worn by long-gone glaciers, green moss now covering the black rock. White sheep forage on steep grass, defying the chilling winds funneled by the deep valley. The subtle hues of the arctic circle are welcoming, comfortable on the eyes. When rare sunrays pierce through the low clouds, the scenery reveals its vibrancy, as the waves reflect a translucent cyan blue before crashing loudly onto white sand. A small but playful groundswell is building, the offshore breeze grooming playful lines down the point, making for welcoming conditions for acclimatizing to cold water and thick neoprene. Knowing it is our last surf before a few days of hard wind, we take full advantage out of every ripple the North Atlantic Ocean sends our way. Tomorrow this place will have taken on a very different, much more hostile appearance.

"When rare sunrays pierce through the low clouds, the scenery revelas its vibrancy" 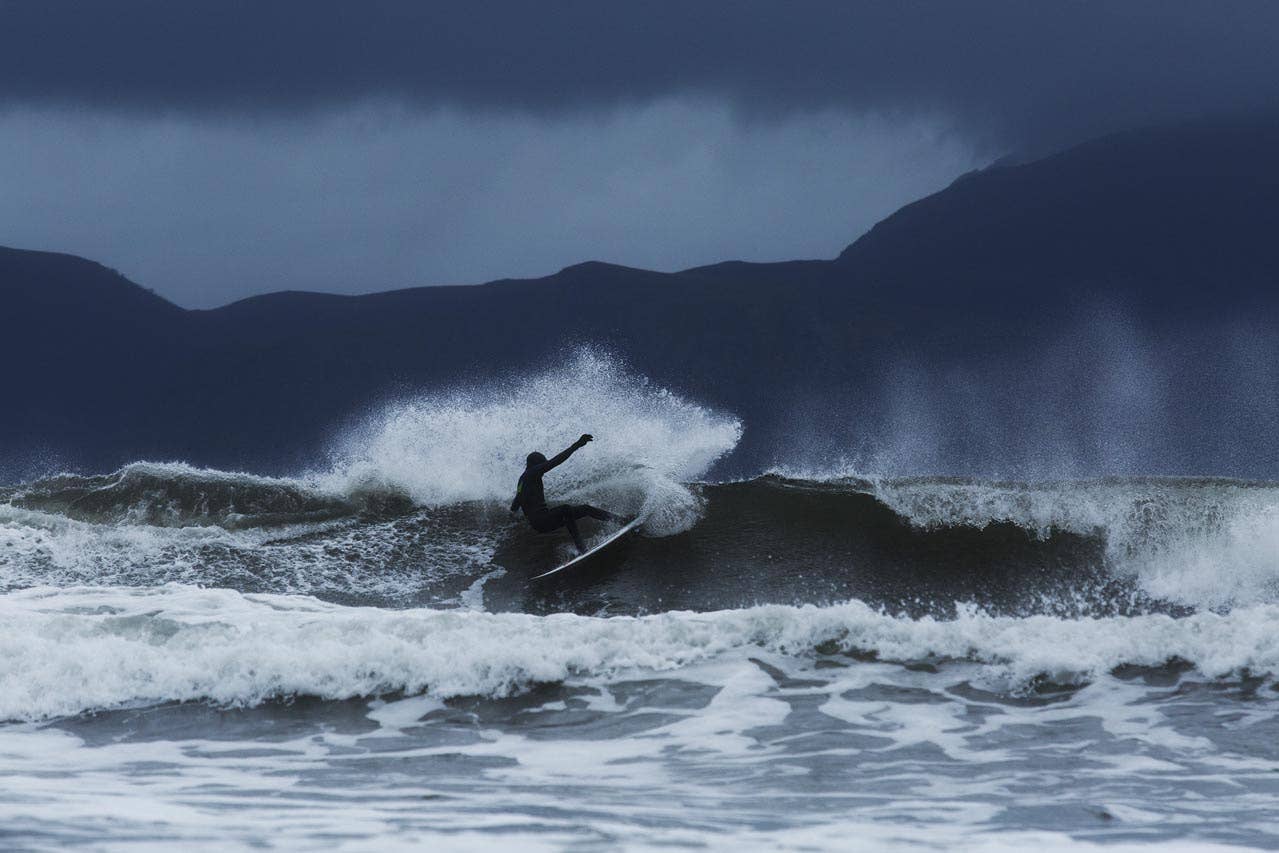 The front is due to arrive any hour now, weather charts calling for anything in between regular bad weather and full arctic storm. In our fishing cabin in the quaint fiord, weather and surf forecast websites are refreshed hourly, for any update or hint on where to find the most manageable conditions. Wetsuits dried and ready, fresh wax coat on the surfboards. Tents are inspected, every seam scrutinized. To properly score in this part of the world, equipment means everything, and any inconsistency can ruin a session, the whole trip even. As our social media devices are put on sleep mode and reading lamps are switched off, the wind grows in intensity, rattling our windows through the night. Every surfer knows the feeling of combined anxiety and excitement, the questions that linger in our minds while falling asleep before a swell. Tomorrow they will be answered; we tell each other before updating the charts just one last time. 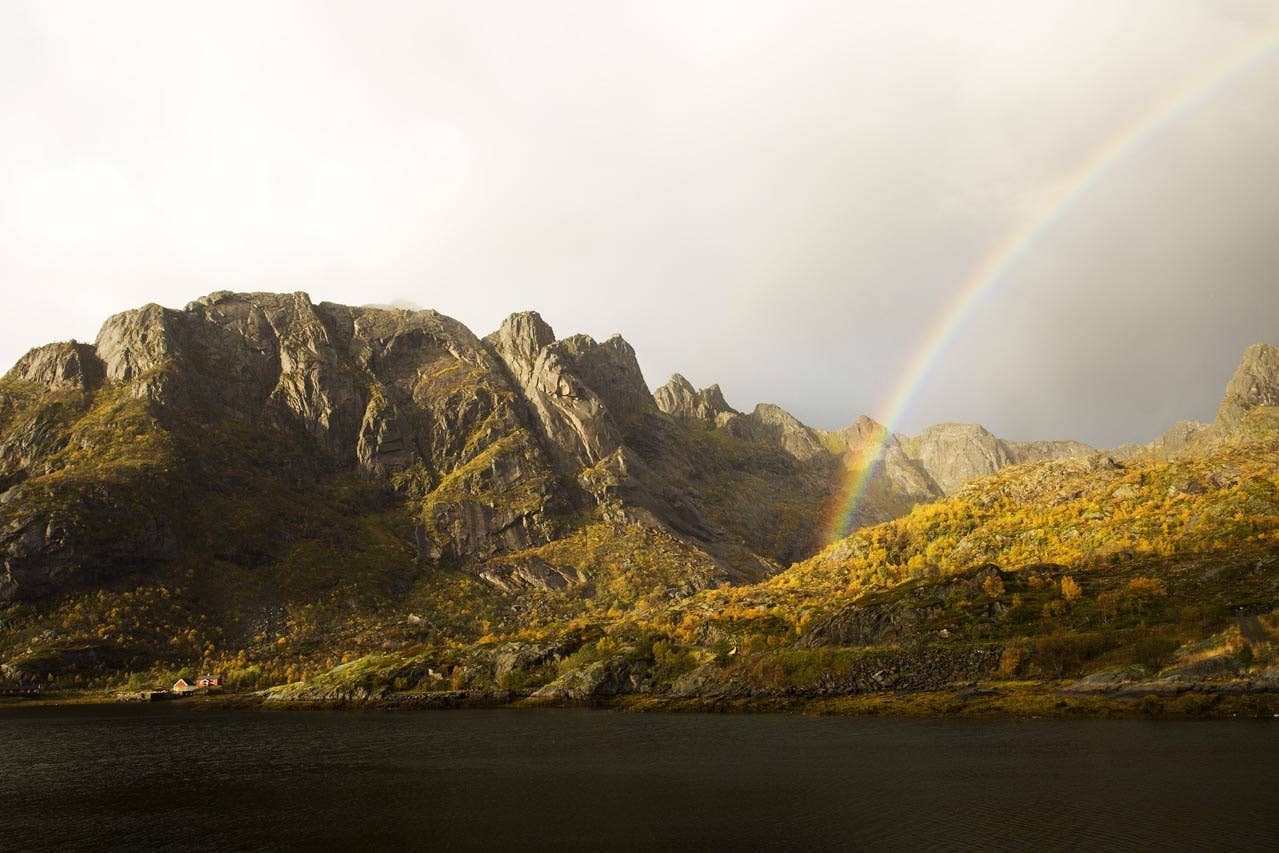 The morning after the winds have subsided, and when arriving at a secret coastline we have been given directions to, we are greeted by clean waves, improving with the incoming tide. A few cars parked in the grassy field outside the quiet farm village, and local surfers getting changed are signs that in 2015, no surf spots are kept away from satellite photos and internet forums. Still, there are enough of waves to keep us all warm in the frigid line-up. The media crew on the beach is doing their best to keep dry. The rain keeps hammering down; to a point where little freshwater streams start flooding the field, and cameras start breaking down. If finding good surf this far north in October is a daunting task, documenting it is proving even more difficult. It's easy to mistake the athletes in the water for the tough ones; stripping naked in near freezing temps and paddling out into the North Atlantic Ocean to get their fix of far-traveled energy. Instead, the real heroes are often the ones on the beach, stumbling on slippery rocks, wearing layers upon layers of technical clothing, cameras in plastic bags, fighting the elements to get the shot, all to make the trip "worth it". Even if the true reward is in the waves surfed, without documentations they are just memories, and in a time where success is measured in thumbs-up icons and visitor stats, the golden memories of the moments you shared in the water are no longer enough, for better or for worse.

A window of blue afternoon sky is getting nearer, and from experience we know that it might be only a matter of minutes before the rain starts again. In only a week, late summer has turned into autumn, the rain crystallizing above us, capping the black mountains with a fine layer of white snow. In front of the picturesque lineup we pitch our tents on wet grass, sheltered by the cliff wall on one side and some old fishing sheds. Neoprene is hung to dry after hours in the water, not that it won't still be wet the following morning, but any attempts to make surfing in the Arctic easier count. As dark falls, we make another pot of pesto tortellini and prepare for the night, to the sound of polished rocks rumbling in the shore break below our tents. 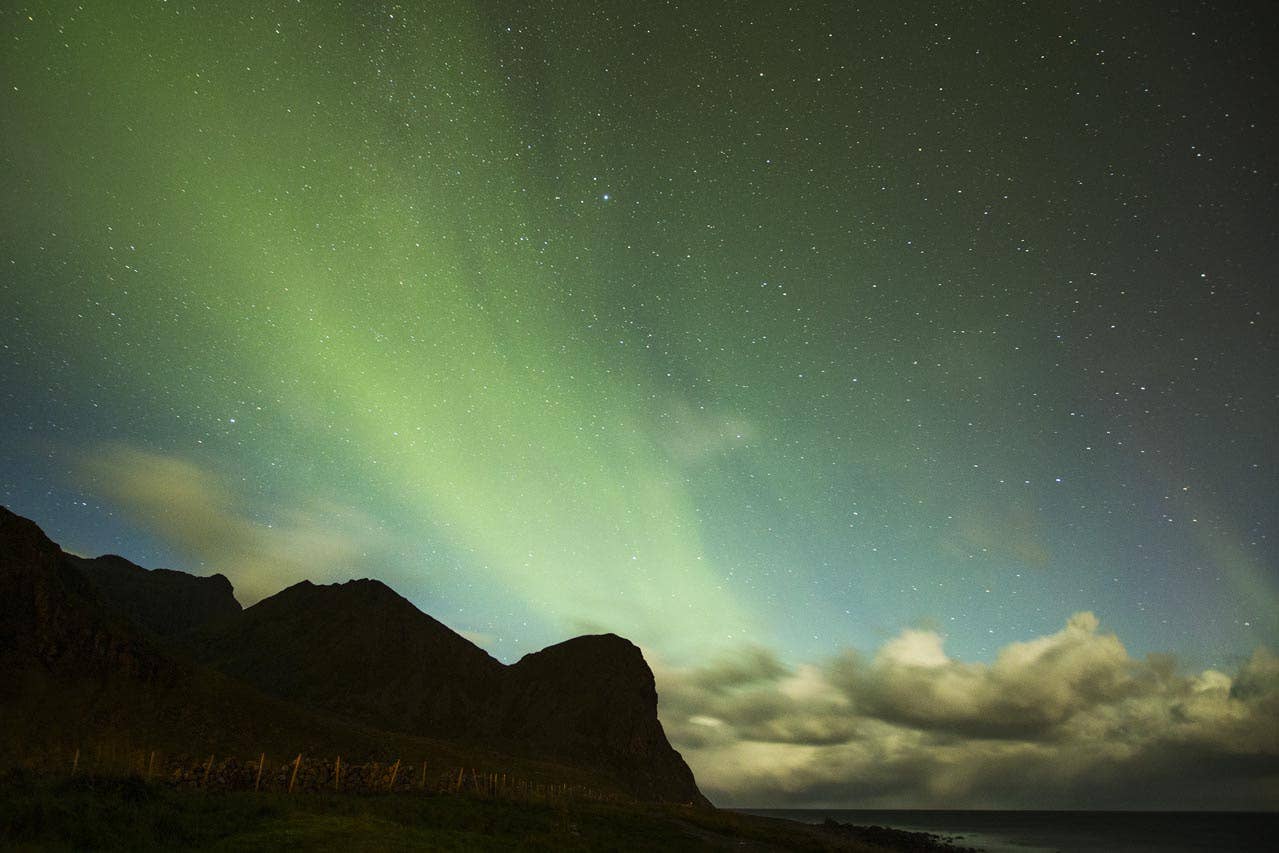 Like a faint torch, a striking green hue shines through the tent fabric, disappearing just as quickly. The sound of zippers does its best to penetrate the ocean's roar, as we curiously peek our heads out into the freezing wind. Moments after, we sprint out in sweatpants, cameras in hand to document the fabled phenomenon the past week’s cloud layer has prevented us from seeing; the Aurora Borealis. It starts with only the faintest streaks of green and blue, seemingly appearing out of thin air, only to vanish before our eyes have had a chance to adjust to the dark. Every pulse becoming more radiant, and before we know it we are gazing in awe at the dancing curtains, shifting colors under starry skies. After a week of battling the elements, it's as if Mother Nature has decided to treat us with just a taste of the breathtaking beauty she is capable of, as if we have finally proven ourselves worthy. With our jaws still open, we watch on as the mesmerizing curtains of emerald green are veiled in a dark cloud layer, and the winds once again take hold of the bay. The exhibition is over for now, but these islands will stay in our minds forever. See you next time, Lofoten, may the forces of life yet again gravitate us towards your majestic shores, because in the hardship of finding what we came for, something else has emerged, a yearning for the undisturbed, the unknown and the truly magical. It’s waiting for you no matter where you are in the world.